The Belgian tax administration has, on the 28th November 2017, stated that a delay is granted for the filing of the Country-by-Country Report, Country-by-Country notification, Master file and Local file, that have to be done by Belgian constitutive entities (ultimate parent entity, for the country-by-country report) of multinational group and for which, the due date was primarily the 31st December 2017.

On July 2016, the transfer pricing legislation has been approved and introduced by the Belgian Government. The legislation is aligned with the three-tiered approach (Country-by-country reporting, Local file, and Master file) of Action 13 of the OECD Base Erosion and Profit Shifting project. These new requirements have to be complied with by Belgian companies for financial years starting on or after 1st January 2016.

If you would like to receive additional information on this matter, the tax team of RSM Belgium is at your disposal 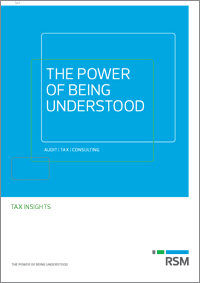